The Georgian pile in the middle of Salisbury 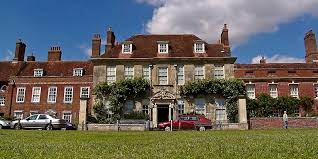 Nestled within the historic town of Salisbury lies Mompesson House. It’s currently under the ownership of the National trust who acquired it as a fine example of Georgian Classical architecture. Being in the middle of the city makes it easy to get to and it’s just one of the many Local things to do in Salisbury.

This is a grand house built for the local MP Thomas Mompesson. By 1701 Mompesson was no longer an MP and the house was still being completed. He died and it passed to his son Charles to finish it. He had to use a part of an old brickwork pub next door for it  to be completed, making it something of a hodgepodge of styles. As with many Aristocratic homes, new bits kept getting added to it. By the time Charles died he had only had a few years to enjoy it. It was passed to his son-in-law Charles Longuville. He added new features like the plasterwork.

After a few generations it came to the Townsend family. The most prominent of these was Miss Barabra Townsend who lived in the house for her entire life of 96 years. She was a celebrated and formidable Victorian lady who died in 1939. It came over to the Bishop of Salisbury who enjoyed residing there until 1942. The Church then owned it until it became too expensive for them to maintain so it was bequeathed to the National Trust who own it to this day.